The Name of the Wind

Often recommended when readers search for:

What do readers say about The Name of the Wind?

a book to savor

a man of legend

complex without being convoluted

DAY ONE: THE NAME OF THE WIND

My name is Kvothe.

I have stolen princesses back from sleeping barrow kings. I burned down the town of Trebon. I have spent the night with Felurian and left with both my sanity and my life. I was expelled from the University at a younger age than most people are allowed in. I tread paths by moonlight that others fear to speak of during day. I have talked to Gods, loved women, and written songs that make the minstrels weep.

You may have heard of me.

So begins a tale unequaled in fantasy literature-the story of a hero told in his own voice. It is a tale of sorrow, a tale of survival, a tale of one man's search for meaning in his universe, and how that search, and the indomitable will that drove it, gave birth to a legend.

Praise for The Kingkiller Chronicle:

"I just love the world of Patrick Rothfuss." -Lin-Manuel Miranda

"Rothfuss has real talent, and his tale of Kvothe is deep and intricate and wondrous."

"It is a rare and great pleasure to find a fantasist writing…with true music in the words."

"The characters are real and the magic is true."

"Masterful…. There is a beauty to Pat's writing that defies description." 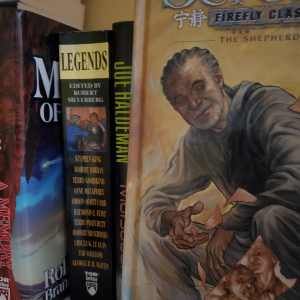 Great writing & story telling. Be prepared that this series may never be complete.

Patrick Rothfuss is the bestselling author of The Kingkiller Chronicle. His first novel, The Name of the Wind, won the Quill Award and was a Publishers Weekly Best Book of the Year. Its sequel, The Wise Man's Fear, debuted at #1 on The New York Times bestseller

What Can You Read After
"The Name of the Wind"?